Cheryl is one of the three daughters of the late Rev. Oliver L. Brown, who along with twelve other parents led by the NAACP, filed suit against the local Board of Education on behalf of their children. Upon appeal to the United States Supreme Court the Topeka case became the lead case among five legal challenges from under consideration by the court. Oliver Brown died in 1961 before knowing the impact of this landmark U.S. Supreme Court decision, which bears his name – Oliver L. Brown et. al. vs. the Board of Education of Topeka, et. al.

Cheryl has been a university guest lecturer, a school teacher and guidance counselor, a state educational administrator, a federal legislative advocate, and is President of The Brown Foundation. She has authored publications and essays about Brown v. Board of Education and has been a member of numerous professional and civic organizations, and presently serves on several local, state and national boards. She is past chair of Women Work, a national network that represented some 15 million women nationwide who were seeking career assistance and employment in non-traditional fields.

In 1988 along with her co-worker, Jerry Jones, Cheryl established The Brown Foundation. In 1990 the Foundation worked with the United States Congress to develop legislation, resulting in the establishment of the Brown v. Board of Education National Park. The Park opened in 2004 in conjunction with the 50th anniversary of the Brown decision. It is located in Topeka at the site of one of the four formerly segregated African American schools. This was also the elementary school attended by their mother, two of the Brown sisters, Linda and Terry, their children, and prior to the school’s closing in 1975, Cheryl began her teaching career there in 1972.

Cheryl has extensive public speaking experience, which includes lectures on more than 300 college campuses and for various national organizations and community groups. Cheryl has received numerous awards in recognition of the Brown decision and has appeared in televised and newspaper interviews about this historic case. You can read more about Cheryl below. 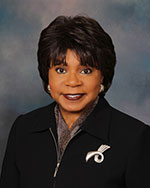 One of the three daughters of the late Rev. Oliver L. Brown who in the fall of 1950 along with 12 other parents, led by attorneys for the NAACP, filed suit on behalf of their children against the local Board of Education.  Their case joined with cases from Delaware, South Carolina, Virginia and Washington, D.C. on appeal to the U.S. Supreme Court and on May 17, 1954, became known as the landmark decision; Brown v. the Board of Education of Topeka, Kansas.  This case was legally named for Oliver Brown, i.e., Oliver L. Brown et. al. vs. the Board of Education of Topeka, KS. et. al.  Brown died in 1961 before knowing the impact this case would have on the nation.

Cheryl is the Founding President of The Brown Foundation for Educational Equity, Excellence and Research, and owner of Brown & Associates, educational consulting firm. She has extensive background in education, business and civic leadership, having served on and chaired various local, state and national Boards.  In addition she has two decades of experience in political advocacy, public policy implementation and federal legislative development.

Her education includes a Bachelor’s Degree in Elementary Education, Minor in Mathematics from Baker University, Baldwin City, Kansas, a Master’s Degree in Guidance and Counseling from Emporia State University, Emporia, Kansas and an Honorary Doctorate of Humane Letters from Washburn University and an Honorary Doctorate of Education from the University of South Florida. She is the recipient of various awards and recognition for work in education and community service; presentations at numerous conferences, conventions and universities; and for her work with Congress and the National Park Service to preserve sites associated with the landmark U.S. Supreme Court ruling of 1954.

She has been a invited to the White House on seven occasions - In January 1994, May 1995, May 2003, June 2004, February 2005, June 2005, and May 2014, she was one of a group of individuals invited to receptions and dinner at the White House, (listed chronologically) in honor of Dr. King and the Children of Civil Rights Movement, the 75th Anniversary, U.S. Department of Labor, Women's Bureau, 49th Anniversary of Brown v. Board of Education, 40th anniversary of the Civil Rights Act., African American History Month, African American Gospel Music Month and the 60th Anniversary of Brown v. Board of Education.

On May 17, 2004, served as principal greeter and introduced President Bush to the 5000 plus people gathered for the grand opening of Brown v. Board of Education National Historic Site in Topeka, Kansas.