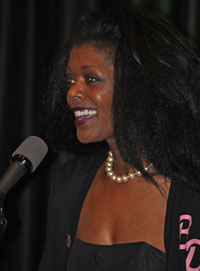 Declared a "Woman to Watch” by Palm Beach Illustrated Magazine, her Lynn University classmates gave her the title "Most Likely to Give Oprah a Run for Her Money!"

Her illustrious career has led to success as a spokes model, newspaper journalist, broadcaster, marketer, event producer, and publicist! She's been the subject of magazine and newspaper interviews, seen on yellow cab ads, and a life size billboard on Broadway in Times Square. Sports fans have heard her on the airwaves of ESPN Radio and countless others have witnessed her PR & Event production magic for legendary stars like Dan Marino, Ronald McDonald, and The Black Dolls!

An unstoppable energy that pushes beyond the status quo to break new ground, she's Dana "Mama Doll" Hill, the Founder of The Black Doll Affair™. In response to the unflattering way black women behave in pop society and the ‘doll test', where black children chose the black doll as ugly and bad and the white doll as pretty and good, to make the world a better place, Dana created The Black Doll Affair!

Under her leadership, The Black Dolls have received the attention of Macy's, Mattel, the Dove Self-Esteem Campaign, Essence Magazine, The Tom Joyner Morning Show, the State of Georgia, and the White House! Congressman John Lewis helped proclaim December 12th as Black Doll Affair in Georgia and, for their outstanding work in service, President Barack Obama recognized The Black Dolls with the President's Volunteer Service Award.