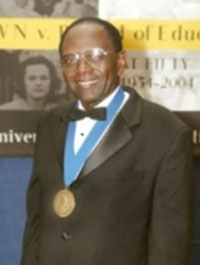 "I am hiding in the bushes to keep from being seen and/or discovered. In my haste to hide, I accidentally ripped the skin off my leg. I now feel that fresh blood as it soaks through my clothing. No, I have not committed any crime. It is the era/time in which I am now living that created this problem. I am living in the era of 'Separate But Equal'. This law did very little to protect people of color."

The above quote is the opening passage and chapter in Stokes’ book titled Students on Strike. In this book, J. A. Stokes takes everyone on a journey through his experiences during the painful era of Jim Crow racial segregation while growing up in Farmviille, Virginia.

For John Stokes and his peers life in rural Virginia was separate, but it was NEVER equal. As a result on April 23, 1951, he joined a group of students led by classmate Barbara Johns and helped organize a strike to protest conditions in the racially segregated Robert Russa Moton .
High School. Stokes became a part of a movement that was felt and heard throughout the world.

This strike set the stage for Stokes to become one of the plaintiffs in the case of Davis vs. Prince Edward County School Board, which on appeal to the U.S. Supreme Court was one of the five cases consolidated as landmark civil rights case, Brown v. Board of Education.

Since retiring, he has served as an adjunct professor at different colleges and universities.
Mr. Stokes has received numerous awards and recognitions due to his stance for the rights of all people, including:

A sculpture of the student strikers was permanently installed at Capitol Square Civil Rights Memorial in Richmond, VA. This unique statue was unveiled in July 2008. Enter Here to view monument.