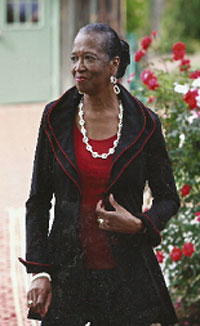 Joy Speaks was a student at Robert Russa Moton High School in Farmville, Virginia located in Prince Edward County when she joined a ban of fellow students, led by classmate Barbara Johns, in organizing a strike to protest conditions at their school.  The school was part of a divided and racially segregated district.  The building was intended to house less than 200 hundred students yet over 400 students were enrolled causing gross overcrowding.  In answer the problem the local school board erected a series of tar paper outbuildings “shacks” to ease the overcrowding.  The structures were substandard leading the students go on strike on April 23, 1951.
Their strike resulted in the case of Davis vs. Prince Edward County School Board which on appeal became one of the cases consolidated as Brown vs. the Board of Education of Topeka.

Joy left Virginia after graduation from Robert Russa Moton High School in 1955.  She attended New York University after which she was employed by Magic Marker Corporation, where she worked for 35 years.  She advanced from Order entry clerk to Sales Director, which required her to travel across the U.S. and abroad.  She went on to serve as the Secretary of the Corporation as a member of the Magic Marker Board of Directors.
Joy is currently employed by Wilpak Industries, Inc., Kearny, NJ as Administrator of Sales & Operations.  She is also President of Friends, Inc. a company that sells advertising specialty products and products made from recycled materials.

Joy returned to Virginia to live in 2007 where she is active with the NAACP, and she serves on the Robert Russa Moton Museum Council and is a Moton Museum Trustee.  In additional she is a member of the Prince Edward County Board of Equalization and Family Challenge Development Chair. Her skills in marketing, public relations and fundraising resulted in her raising $170,000 through what she calls the “Family Challenge”.  Her efforts continue to bring in thousands of dollars in donations in support of Robert Russa Moton Museum and its mission.