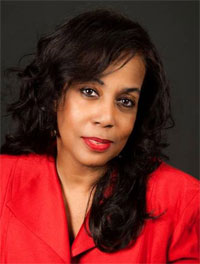 Lynne M. Jackson is a great-great granddaughter of Dred Scott, and founder and president of the Dred Scott Heritage Foundation. The goal of the foundation is to promote the commemoration, education and reconciliation of our histories, with an eye toward helping to heal the wounds of the past.

Dred Scott and his wife, Harriet, were pioneers in the American civil rights movement. Their case, the landmark Dred Scott Decision of 1857, became a major catalyst for the Civil War. In little more than a decade after the Decision was rendered our nation abolished slavery, granted equal citizenship to African-Americans, and guaranteed the right to vote regardless of race or color. The courage and sacrifice of Dred and Harriet Scott and their family played no small part in achieving this monumental victory.

Since the inception of the foundation in 2006, Lynne has dedicated herself to casting a new light on the history of her ancestor and the landmark Dred Scott Decision by commemorating, educating and actively working toward reconciliation. She has traveled across the United States sharing the story of her ancestors, their case, and what it means to the future of this nation. Her efforts have been effective and thorough.

In 2007, the City of St. Louis, the Jefferson National Expansion Memorial, Bryan Cave Law Firm, Washington University and numerous other local organizations and institutions worked side by side with Lynne and the Dred Scott Heritage Foundation to facilitate the commemoration of the 150th Anniversary of the Dred Scott Decision. In May, 2007, the Foundation renamed the block of Fourth Street to “Dred Scott Way.”

Since that time, the Missouri Senate has honored Lynne with a recognition resolution from the State of Missouri. She received resolutions from three Southern Baptist Conventions which voted and resolved to denounce racism and asked forgiveness for their stand on slavery during the Dred Scott era by promoting a commitment to reconciliation. Lynne spoke in the state capital as Dred Scott was inducted into the Hall of Famous Missourians at the Missouri capitol building.

Under Lynne’s direction, the Dred Scott Heritage Foundation commissioned and erected a life sized statue of Dred and Harriet Scott and has dedicated it to the American people outside the place where Dred and Harriet Scott first filed for their freedom, the Old Courthouse in St. Louis, Missouri. The statue is under the custodial care of the National Park Service.

The Sons and Daughters of Reconciliation ™ are individuals who have committed to participating in educational programs of the Dred Scott Heritage Foundation to promote and remember their ancestor’s histories and their importance to the generations who do not know. Several include descendants of past slave owners. In recent years, several have convened at the Annual Reconciliation Forum.

Lynne was born and raised in St. Louis, where she and her husband, Brian, now reside. They have two children.

SPEAKING HIGHLIGHTS:
Lynne is a veteran of over 300 speaking events. Following are a few of the highlights of her presentations and appearances from 2007 to present:

In addition to these, Lynne has spoken for numerous schools, colleges and organizations.