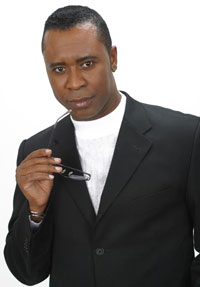 He has amassed over 30 television credits from Sit–coms, Film to Soap Operas. Guest Starring on J.A.G.- Bold & Beautiful, Batman & Robin, Half Past Dead, ER, Bernie Mac Show, FBI, to name a few.

A character actor with leading man appeal he has authentic Jamaica, British and African dialects; and has played many on screen.

As a Stand up Comedian he Co -Headlined USO Comedy Tours in Tokyo, Japan and Okinawa. He has appeared on the Gulf of Mexico, the South of France, London and Comedy Clubs around the Country.

The play has been performed at over 200 Universities from Yale to The Univ. of the West Indies, hired by The Dept. of Education of the US Virgin Islands for six shows in St. Thomas & St. Croix. Has worked with the US Embassy & State Dept in Barbados & Nassau, as well as sold out appearances from Kona, Hawaii to six Caribbean Islands. The first show to appear at The National Civil Rights Museum in Memphis, The Museum of NYC, as well as Theater Festivals in Miami, Hollywood & Paradise Island, Bahamas.

This play is the most challenging performance of his career & the piece of work of which he is most proud. The play; a Tribute to the Legacy of this tortured American Genius; hopes to inspire others to emulate the life of Robeson & propel them to greater achievement & a more noble life. To awaken a new generation so that the lost brilliance of Paul Robeson doesn’t remain lost. To let all people know; that the best of Paul Robeson lives in all of us & with it the power to change the World. 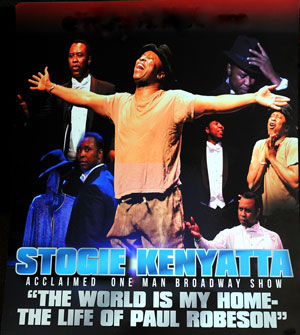 Stogie is a sought after Master of Ceremonies, performer and keynote Speaker.

Theatrical performance – A One Man Show – “The World is my home: The Life of Paul Robeson”