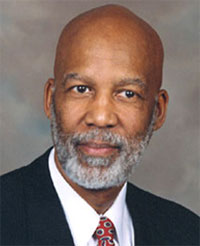 Terrence Roberts was born in Little Rock, Arkansas, to William L. and Margaret G. Roberts. He first attended segregated schools like Dunbar Junior High School and Horace Mann High School. In 1957, he volunteered to attend the all-white Little Rock Central High School the next fall, helping to desegregate one of the nation's largest schools.

On September 4, 1957, the Little Rock Nine made an unsuccessful attempt to enter Central High School, which had been segregated. The Arkansas National Guard, under orders from the governor, and an angry mob of about 400 surrounded the school and prevented them from going in. On September 23, 1957, a mob of about 1000 people surrounded the school again as the students attempted to enter. The following day, President Dwight D. Eisenhower took control of the Arkansas National Guard from the governor and sent soldiers to accompany the students to school for protection. Soldiers were deployed at the school for the entirety of the school year, although they were unable to prevent incidents of violence against the group inside.

As a result of the subsequent closing of Little Rock's high schools during the 1958-1959 school year, Roberts completed his senior year at Los Angeles High School[1] in Los Angeles, California.

Roberts continued his education at California State University, Los Angeles and graduated with a Bachelor of Arts degree in sociology in 1967. He received his Master's degree in social welfare from the UCLA School of Social Welfare in 1970, and his Ph.D. in psychology from Southern Illinois University, Carbondale, in 1976.

From 1975 to 1977 he was a member of the faculty at Pacific Union College, a private liberal arts college in Napa Valley, California.[2] From 1977 - 1985, Roberts was director of mental health services at St. Helena Hospital and Health Center. From 1985 to 1993 he was Assistant Dean in the UCLA School of Social Welfare.

Roberts joined the Antioch University Los Angeles in 1993 and served as core faculty and co-chair of the Master of Arts in Psychology program, before retiring in 2008.[3] In addition, he is CEO of the management-consulting firm, Terrence Roberts Consulting.
Terrence Roberts was prominently featured on interviews and videos during the day Barack Obama was inaugurated as the 44th President of the United States of America.[4]

Roberts published his memoir LESSONS FROM LITTLE ROCK in 2009. A second book, SIMPLE NOT EASY, was published in 2010.