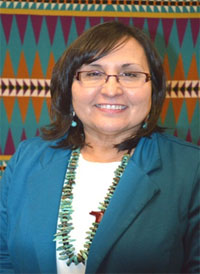 Venida Chenault was selected as the seventh president of Haskell Indian Nations University on January 4, 2014 and the first student at Haskell to become President. Dr. Chenault is a member of the Prairie Band Potawatomi and Kickapoo tribes and the mother of three adult sons and a daughter. She is also an adopted mother and grandmother in her tribe.

Dr. Chenault began her educational career at Haskell Indian Junior College. She attended Haskell in the Fall of 1975 and in the Spring of 1984. She transferred to the University of Kansas where she earned her Bachelor’s in Social Welfare and Master’s in Social Welfare in May 1990 before returning to Haskell as a faculty member in 1991. She was recruited to re-establish the Haskell Social Work Program and designed curriculum, established articulation agreements, taught in the Social Work program and mentored hundreds of social work majors during her 14 years in the academic ranks.

Throughout her tenure in the faculty ranks at Haskell, she worked tirelessly in numerous administrative capacities, served on the Faculty Senate, and contributed to vital committees, including co-authoring the proposal for the bachelor’s in American Indian Studies approved by the Higher Learning Commission, serving as the first interim director of American Indian Studies and authoring grants to expand opportunities for Haskell students and to provide support for faculty pursuing terminal degrees.

In 2005 she completed her doctorate at the University of Kansas and was selected as the Vice-President of Academic Affairs. She provided leadership as the Vice-President for 9 years . She served during the successful 10 year accreditation of the university and authored Title III grants which generated significant revenue for capacity building within the university. Honors and awards during this time, include being selected as an American Indian Mellon Fellow, receiving the American Indian Leadership Award in 2005 from the University of Kansas Indigenous Studies Program and being selected as the Recipient of the Haskell Outstanding Alumni of the Year Award for her contribution to Indian Education in the Spring of 2009. While serving as a Visiting Scholar at the University of Kansas from October 2008 to October 2009, she authored a bookWeaving Strength Weaving Power: Violence and Abuse Against Indigenous Women. This book examines the structural factors that have contributed to the phenomenon of violence and abuse against Indian women and shares a quantitative analysis of the rates and impacts of violence and abuse against Indigenous college students.

Through her leadership and commitment to student retention, the Haskell Success Center was established to improve student persistence and to increase graduation rates and these rates have continued to increase. Her stable leadership has focused on ensuring Haskell students have access to high quality academic programs, as reflected in the NCATE accreditation of the Elementary Teacher Education Program in 2013, new research and internship opportunities for students, as well as improvement in academic technology throughout the university.

Dr. Chenault is passionate about the importance of the opportunity a Haskell education provides. She is committed to ensuring students and graduates acquire the caliber of knowledge, skills and degrees needed to provide high quality services in tribal and non-tribal organizations. She attributes her success to her beginnings at Haskell. She followed the footsteps of many generations of her family, including her mother, uncles, sisters, brothers and other extended family, who began their careers at Haskell. Dr. Chenault’s oldest sons and her daughter are also Haskell alumni, who take great pride in the university.